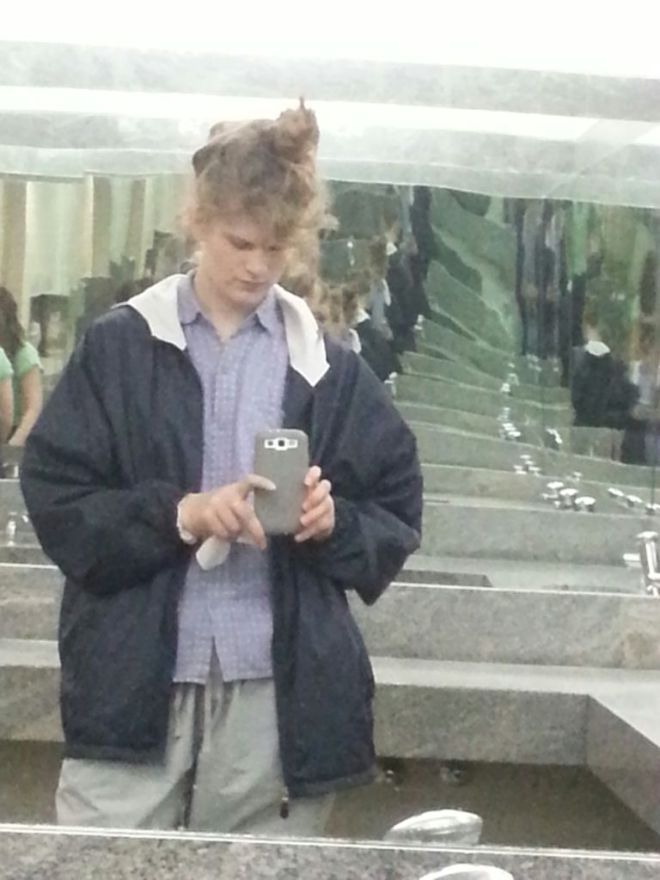 A few years back I was in Berlin by myself for two weeks. This is the first time I had ever traveled alone. There was a festival happening. I went to see a William Forsythe installation called White Bouncy Castle. It was in a nature park on the other side of town. I took the tram. I got lost. I showed up. I was one of the first people there. You paid to get into the park. It was cloudy. I thought it was going to rain. I entered into the nature park and followed the path to the middle of the park, where there was an abandoned train station. An English-speaking employee showed me the right direction. I entered the station and paid €5 to a man in a little hut. Inside, it looked like an empty auto trade centre. I saw only employees and festival volunteers — and a massive white bouncy castle. I was directed to the left by arrows on the floor to a table where I was given a laminated tag with a number on it and I was instructed to remove my jacket, shoes, and jewelry. I placed my bag and belongings in a rubber tub. An older German woman gave me a reassuring “Ja” — that my things would be safe. And then she told me to walk to the far end of the warehouse. More arrows. At the entrance of the bouncy castle, an employee told me I had twenty minutes. I looked down the long tunnel to see that no else was inside the castle. Then I stepped in. I spent the first ten minutes doing bum-drops by myself. I became exhausted and started sweating. Eventually, a few other jumpers joined. I spent the rest of the time sitting at the side, watching them. And doing the odd forward-flip. As I made my way to the exit, I realized that I had lost my numbered tag. I gestured to the employee waving me out that my pockets were empty, and I had lost something. And so I ran back into the white bouncy castle to find a very small, white piece of plastic. I searched many cracks — difficult while others were jumping. I found it. I left. More arrows. I got my stuff. I put my shoes and my jacket back on. I exited back into the nature park. It started to rain. I had paid to get in there and didn’t want to leave quite yet, so I decided to follow some of the paths around. The paths were raised metal platforms running through the park so that you could view the numerous goats that happened to live there, in the midst of one or two contemporary sculptures. I sat down and ate my lunch that I had brought with me and eventually I left. And it all felt like a dream.

One experience, which I will share, was particularly memorable in changing my own idea of what art could be. In 2006, my family took a trip to France, and on that trip we visited the Pompidou in Paris. The Pompidou was as striking architecturally for me as the content was. Within the gallery I remember wandering through seemingly endless installations, containing miniature realms full of extremes. One room was painted entirely pink with a gigantic version of a pink high heel shoe, another had a video of a man walking around a painted square on the floor, and another a car that was destroyed as if in a car crash. Along the hallway there were about twenty projections of flowers, laid over one another, creating a jarring moving effect that was absolutely unbearable to look at. There were also couches covered in blankets laid out in the main hall, continuous with the exhibition space, which we dozed on during our visit. My fourteen year old self was blown away not only by the scale of the exhibit, but by the way art could take on any form and be so powerful and immersive. I think that was the point too when I fell in love with how powerful the absurd and the extreme could be. I feel this experience at the Pompidou was one which changed my own idea of art in a very profound way.

I am so honoured and excited to have selected the first group of Shooting Gallery artists. These five strange and wonderful creators will each be sharing a new work with you at our March presentation!

In choosing artists for this show, I spent a lot of time thinking about work I’ve seen and loved and things that have had a lasting effect. In the weeks leading up to the show, I’ve asked the SG artists to share an experience they have had viewing art of any kind that was intense or inspiring.

There are so many pieces that have truly touched and stayed with me. Two of the ones that I end up talking about most were actually not dance (my first love) or even performance. And really, were not exactly enjoyable at the time. But these are experiences that I carry with me and think of often.

One was a video work featured at the Push festival a few years back. It was by Ryoji Ikeda. I don’t know the name of it, I haven’t gone back to check or find out anything about the work or the artist. I like my memory of it the way it is and don’t need any further information. A friend had gotten tickets and taken me along. I wasn’t in a particularly great mood and didn’t bother to read the program as we entered the theatre. I had no idea what we were about to see and was preoccupied with other thoughts. And then, darkness. Bright light, patterns and cacophonous noise. Somehow this minimal work, literally only black and white lines, was an assault on the senses. It completely took me out of myself. And at some point, (I don’t even know how long the piece was) everything went white and there was silence, and my breath caught in my throat in that over dramatic way that never happens in real life. I remember it now as an experience of nothingness. I was alone in the theatre, or rather not in a theatre at all. And then on the screen, stars in neat scientific constellations; some kind of digital mapping giving them coordinates one by one. I don’t remember how it ended. I don’t know what it was about. It’s one of my all time favourite works of art.

The other experience that comes to mind happened while I was living in Berlin. My husband and I had the good fortune to meet up with an old friend, one of the mad scientist geniuses from EATart that is now making his magic happen at MIT. He wrote down an address for us and advised us to find the labyrinth. So a few weeks later, when we had some Canadian friends staying with us, the four of us, armed with an address scribbled on a napkin, went off in search of this outsider art installation in the back room of some apartment building turned dance club. Once we had found the hippy fellow that could grant access to this labyrinth, I was horrified to realize first, that each person enters alone, and second that the order people are chosen in is completely random. I imagined myself lost forever in some terrifying maze and told my husband that I would go in first and that he was responsible for finding and saving me if I never emerged. When it was my turn, I was given a gold coin and blindfolded. I opened my eyes to find myself alone in front of a large wooden door. A coin slot waited. Once inside, I made my way up a ladder in the dark. I crawled through tight passageways, motion sensor lights illuminated the path just ahead, not allowing me to see what I was traveling towards. Taxidermied animals stared at me from glass terrariums on either side and after a while, I came to the end of the corridor. In front of me was a hole, a tunnel into darkness. I think what it was really, was a tube slide. But either way, I could see that once I dropped down this passage, there was no going back. And there was no telling what was down there. And I sat having a panic attack for maybe ten minutes.

And perhaps it was luck or perhaps the master of the labyrinth could see before I went in that I was a big baby, but my husband was the next person chosen to enter the maze. And while debating my descent into darkness, Ed came crawling down the passage utterly fearless, and we held hands and dropped into the void together. What came next, I remember as an epic journey. Rooms of machinery, the ventricles of a giant heart, eye balls watching you pass from slits in walls, and hallways that echoed with your softest footfalls. There were many moments of delight and also terrifying passageways that I’m not sure I would have survived on my own.

I could go on and on, but I don’t want to say too much. Ask me about it sometime when I have a drink in my hand. And if you are ever going to Berlin I have an address I’d like to write on a napkin for you.